Add color and brightness controls: in Advanced menu, there are now settings for Brightness, Contrast, Saturation, Hue. You can use the built-in Xbox One calibration tool to adjust the HD PVR Pro 60 settings. To do this:

New in this version: fixes snapshot in standalone mode

Notes:
To record one long continuous file on the SD card, format the SD as ExFAT. If you leave the SD card as FAT32, long recordings will be broken into 4GBbyte recordings (about 1 hour each).
To switch back to record on a PC, set the ‘Rec Mode’ switch to ‘PC’.
If your SD card is write protected, you will not be able to record and the light will blink RED twice and then go solid GREEN.

When using the HD PVR Pro 60, are you not getting game audio in your PS4 recordings?

The PS4 turns off HDMI audio when a headset is plugged into the controller. So, to get into your recordings, do this:

HDMI audio from the PS4 includes both game audio and multiplayer chat. When you plug in your headset into the PS4 controller, the PS4 shuts off HDMI audio and you will get game video but no game audio in your recordings.

To fix this problem:

Step 2: set the 'Audio In' in Hauppauge Capture to 'Controller In' and you will get PS4 game and multi-player audio in your recordings with the HD PVR Pro 60. How to record your PC screen with HD PVR Pro 60

Use Zoom with the HD PVR Pro 60

I want to plug my headset into the HD PVR Pro 60, but not connect a controller. What will I hear in my headset?

You will hear HDMI audio (audio from your video source).

When you have your headset plugged into the Headset port, HDMI audio is routed to three places: over the USB bus into your PC, out the HDMI Out port to your monitor and also to the headset. You will hear your game audio in your headset.

I'd like to use an external microphone instead of my video camera's built-in mic when streaming with the HD PVR Pro 60.

If you have a 4-pin headset with microphone, simply plug this into the headset in connector on front of the HD PVR Pro 60.

If you are conferencing with Zoom or Skype and want to turn off the HDMI audio (which normally comes from your camera's built-in microphone), do this:

What do the lights on the Pro 60 mean when it is in stand alone mode?

When I plug my game controller into the Controller In port on the HD PVR Pro 60, what happens to the audio?

As soon as you plug anything into the Controller In port, HDMI In audio is disabled (HDMI passthrough is continued to be passed through) and audio to both your headset and to the USB bus now comes from the Contoller In port.

I am using an Xbox One X. When I connect my controller to the Controller In port on the HD PVR Pro 60, the game audio volume is too low. How can I fix this? 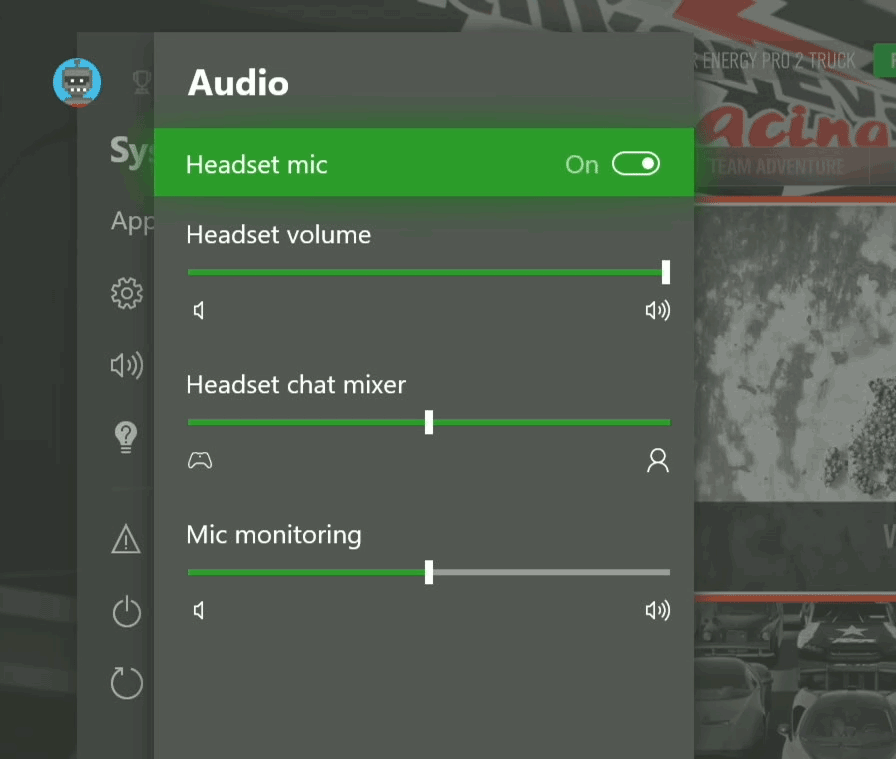 Xbox One game audio volume too low? Here's how to fix it!

On your Xbox One X with your headset connected to your Xbox controller, hit the Xbox button to go to Home.

Then go down to Settings.

Use the Left stick on your controller to go right.

Go down to Audio.

Use the A button to select Audio.

Go to Headset Volume. Increase to 100% (or less as you like). Then use the B button to go back to the main menu.

If, after making this adjustment on your Xbox One X, the headset volume is too high, you can adjust it down in Hauppauge Capture by using the Headset slider on the left side of Hauppauge Capture.

I am getting low game audio volume in my Xbox One X recordings, but my microphone audio is good. How can I fix this?

The Xbox One and Xbox One X controllers can be configured to lower the game audio volume in the Xbox One Chat mixer. We find that sometimes this knocks down the game volume too much. To fix this, on your Xbox One go to:
Settings -> Display and Sound -> Volume -> Chat Mixer
and set this to Do nothing

I'm trying to record from a Nintendo Switch, but I'm getting a 'No HDMI signal detected' message. How can I fix this?

The basic problem is that the Switches HDMI resolution is not what the HD PVR needs to sync up.

What's the maximum bit rate of my PC based recordings?

How can I record multi-player game chat with my console?

With the Xbox One and Xbox One X, game chat is only available from the Xbox One controller. To record game chat plus game audio, use the supplied 4-pin to 4-pin cable to connect from your Xbox One controller to the Controller In jack on the front of the HD PVR Pro 60. This brings game audio plus chat into the HD PVR Pro 60. Note: as soon as you plug in the 4-pin cable into the Controller In jack on the Pro 60, the HDMI audio is muted for recording (but not passthrough).

How can I record record my game commentary with the HD PVR Pro 60?

The HD PVR Pro 60 is an audio mixer inside which will take the microphone from your headset, and both add it to the recording and at the same time, send it out to the Controller In jack.

To do this, simply connect your headset to the Headset In on the HD PVR Pro 60. If you want your commentary to be sent as part of multi-player chat, connect your game controller to the Controller In jack on the front of the Pro 60.

Using HDMI video, what is the highest Resolution/Frame Rate I can Capture with the HD PVR Pro 60?

Does the HD PVR Pro 60 have lag-free pass through?

Yes, the HD PVR Pro 60 has a no delay pass-thru for 4K and 1080p video sources, so you can see your game on your TV set and at the same time, record your game play.

What is the button on the top of this device used for?

The button is used to start and stop recordings.

Does the HD PVR Pro 60 come with a power supply?

No, the HD PVR Pro 60 is powered by the USB 3.0 port on your PC. If you are trying to record standalone, you can use a standard USB power adapter as long as it is rated at 5v at 1 amp.

The HD PVR Pro 60 is compatible with both OBS and XSplit for streaming.

Hauppauge is currently working on a version of StreamEez to run with the HD PVR Pro 60.