Note: this firmware is included as part of all Hauppauge Capture installations

Note: the firmware update takes about 10 minutes. After you start it, go get yourself a cup of coffee. When the firmware upgrade is complete, a message will appear on your screen.

Note: this driver is included as part of all Hauppauge Capture installations

This version has an update to fix a Code 52 installation problem on some versions of Windows.

To install this driver update:

HD PVR 60 Gaming Edition has video pass through for no delay recordings. Simply connect HD PVR 60 between your game console and your HD TV set.

Note: the HD PVR 60 does not have analog inputs, so it cannot record video from a retro game console such as the NES. If you would like to record retro game play, you can use the HD PVR 2, the HD PVR Rocket or Colossus 2

Note: the HD PVR 60 cannot record encrypted HDMI video. If you are recording game play from an Xbox One or PS4 and are getting flashing video or no video in your recordings, you should make sure HDCP is not enabled on your console. For instructions on turning off HDCP, please see 'PS4 setup' or 'Xbox One HDCP' above. 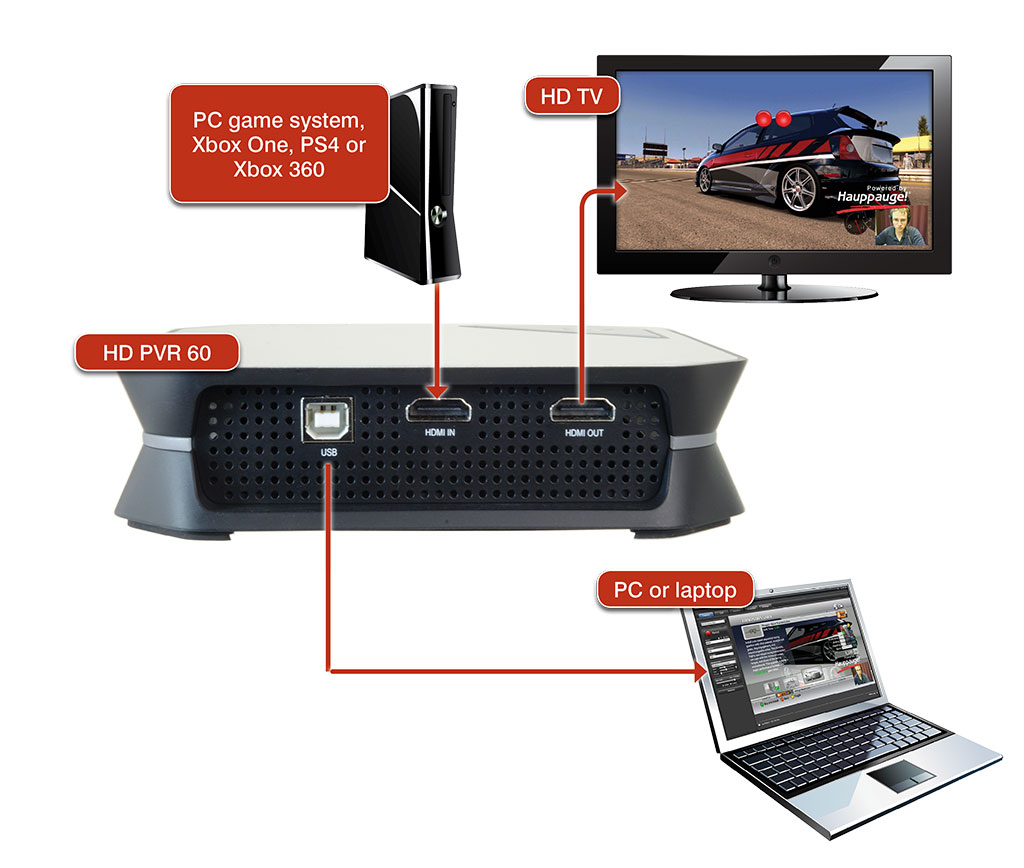 Setup guide for OBS from ChosenGaming

Using Facecam in your recordings

How to record your PC game play using HDMI

Record in-game chat with the PS4

Use Facecam in your recordings

Record in-game chat on the PS4

OBS and the HD PVR 2

How to: Record game commentary with a Turtle Beach PX21 headset and an Xbox 360

How to use the HD PVR 2 to stream with YouTube

How can I record game chat from the Xbox One?

What kind of webcam can I use to make Facecam videos?

Hauppauge Capture uses most webcams, either HD or standard definition, as long as it has a 'raw' YUV or YUY2 mode. MJPEG and other compressed formats are not supported in Hauppauge Capture. Your webcam can be 4:3 or 16:9. Popular webcams include the Microsoft Lifecam HD-3000 plus, if you have a laptop, the built-in webcam.

Hauppauge Capture chooses the most suitable video mode supported by your webcam. You can set the size of the video, and the format (4:3 or 16:9) in the Settings menu of Hauppauge Capture.

The latest version of Hauppauge Capture now has support for a number of Logitech webcams.

The HD PVR 60 can record any source with HDMI without HDCP. Common examples: XBOX360, Xbox One, PC Graphics card or the WiiU.

Depending on what game you are on, I highly recommend you turn down game volume as well as sometimes voice chat can't be heard because the game volume is too loud. However I guarantee that there will be a way to turn down your audio setting on whatever game you are on. Make sure you make it loud enough to hear, but quiet enough to make the voice chat clear and easy to hear.

Using HDMI video, what is the highest Resolution/Frame Rate I can Capture with the HD PVR 60?

Does the HD PVR 60 have lag-free pass through?

Yes, the HD PVR 60 has a no delay pass-thru so you can see your game on your TV set and, at the same time, record your game play.

What is the button on the top of this device used for?

The button is used to start and stop recordings.

What do the Lights on the HD PVR 60 mean?

Does the HD PVR 60 come with a power supply?

No, the HD PVR 60 is powered by the USB ports on either your PC or game console. If you are trying to record a source without a USB port,you can use a standard USB power adapter as long as it is rated at 5v .75amp.

If you are getting distorted audio, try the following possible solutions:
Back the Quality setting down a little bit. On some computers, the maximum bitrate on the HD PVR 60 will result in broken audio
Make sure you close any other application on your Windows PC. Since the audio mixing is done in software, if your CPU becomes too busy, you will get distored audio

Are you unable to record video, getting no video (but are getting audio) in your recordings or a black screen in Hauppauge Capture?

The HD PVR 60 cannot record HDMI video which has HDCP copy protection. This can be from an Xbox One or a PS4, or a cable TV or satellite box.

If you have a cable TV or satellite box, you must use Component video and not HDMI. If you have a PS4 or an Xbox One, you need to disable HDCP. Here is how to do this: