Previous versions of WinTV Extend used Flash as the streaming format. Flash has been discontinued as of Dec 31, 2020. The latest version of WinTV v10 with Extend uses HLS (which stands for 'HTTP Live Streaming') in place of Flash and has been tested on Chrome and Firefox. 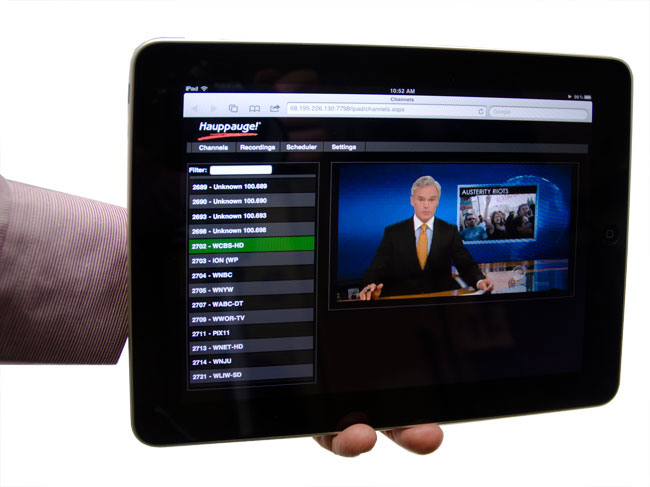 WinTV Extend is an Internet video streaming application built into some versions of the WinTV v8 and WinTV v7.2 applications. WinTV Extend takes the live TV signal from any Hauppauge TV tuner and converts the TV signal into a form which is compatible with an iPad, iPhone, iPod Touch, PC or Mac computer. WinTV Extend then 'streams' the converted TV signal over the Internet to the receiver device.

WinTV Extend can be stream to a web based client, or if you are using an iPad or iPhone, you can use the Hauppauge Extend app which can be downloaded from the Apple app store.

WinTV v8 with Extend and WinTV v7.2 with Extend run on Windows based PCs with Windows 10, 8, 7, Windows Vista or Windows XP. It currently does not run on a Mac, though TV from WinTV Extend can be watched on a Mac.

WinTV Extend has the following features

To run WinTV Extend, you need to have a WinTV TV tuner in your PC and your PC needs to be connected to either a home Wi-Fi network or the Internet.

The WinTV Extend app for your iPad or iPhone

Here's a link to the Hauppauge Extend app on the Apple app store:

If you are using a Mac, PC or Android device, all you need is browser (Safari recommended on the Mac, Chrome or Internet Explorer on your PC). If you are using an Android phone or tablet, you need to be running Android version 4.1 or later.

To run Extend on your device, you will use a browser. Please refer to the Extend Quick Install Guide in the section called "Watching TV on your iPhone, iPad or other remote device ".

WinTV v8 with Extend is available from the Hauppauge webstore at a cost of $9.95 (plus shipping). You can order it from:
http://www.hauppauge.com/site/webstore2/webstore_cd-wintvv8.asp

If you click on the Gallery tab above, you will find some screen shots of an iPhone receiving video from WinTV Extend. The iPhone pictures show the TV control overlay with Pause and 30 second replay. 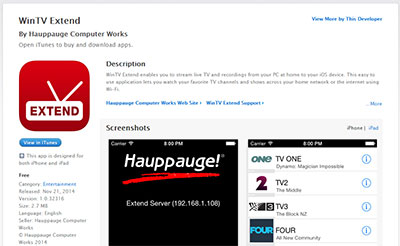 Find the WinTV Extend app on the Apple app store

Here's a link to the Extend app on the Apple app store:

How fast does my PC need to be in order to use WinTV Extend to stream over the Internet?

We typically recommend an i5 or faster or equivalent.

Why can't I see all of my TV channels on my iPad?

Extend uses Flash, but I read that Flash support in many web browsers is being discontinued in 2020. Will I still be able to use Extend?

Yes. Hauppauge is moving from Flash to HLS, which stands for 'HTTP Live Streaming'. HLS is support on most if not all modern browsers.

Today, if you have WinTV 8.5.37092 or later and you are using the Edge browser, you will automatically use HLS. You will know you are using HLS if you see /win10 in the URL.

The latest versions of WinTV v10 with Extend (version WinTV v10 38358 or later) uses HLS in place of Flash.

My PC is running very slow when I'm using analog cable TV with WinTV Extend. What can I do to improve my system performance?

I'd like to watch TV on my iPad from outside my house. How do I open a port on my router so that this will work?

For WinTV Extend to be used from outside of your home, you need to have an open "port" on your Internet router which allows video to pass from the PC which is running WinTV Extend to your iPad or other supported device.
For instructions on opening a port on your router, click here.

Can I use WinTV Extend with the IR blaster?

Can I use WinTV Extend with the HD PVR?

If I use Extend with an HD PVR 2 which is connected to a cable box and the TV channel is 1080i, will the transcoded video be de-interlaced, and if so will it be 60 fps or 30 fps?

Normally, Extend will encode the video to progresive via one of the built-in profiles (which can be customised). It will be encoded at 30 or 25fps depending on the input fps. e.g. 60 will be 30, 50 will be 25.

Here is an example of the profile for PC streaming, which comes from the WinTV Extend configuration file:

I have a data plan on my iPhone which is limited. How much data will WinTV Extend use?

WinTV Extend, when used to send video over a cell phone network, consumes approximately 490 Mbytes per month for 10 hours of remote TV watching. When WinTV Extend is used through a WiFi network, there is no cell phone usage.

Get information on configuring your router at home so that WinTV Extend can send live TV over the Internet.